“Holocaust denial and antisemitism is rising around the world but, of course, in Poland too. The nature of evil is that it’s immortal… I hope things will get better, but that is why we have to protest.”

The Polish rock band Trupa Trupa, which recently toured the UK and will return in January, are unlike other acts in their readiness to directly tackle perhaps the most troublingly complex element of their country’s history: the Holocaust.

Following a run of shows in London, Leeds, Brighton and Glasgow, Grzegorz Kwiatkowski — singer, guitarist and one of Trupa Trupa’s two songwriters — told the JC the impulse to pen the political songs was borne of his own family tragedies.

His grandfather was imprisoned in the Stutthof concentration camp near to Gdansk, the band’s hometown. Both he and Mr Kwiatkowski’s father were deeply scarred by Nazi atrocities committed during the war.

Now with antisemitism and Holocaust denial on the rise in Poland and across Europe, Trupa Trupa’s provocative lyrics have drawn rave reviews from human rights activists and left-wing journals.

The most notable is the track Never Forget, on the album Jolly New Songs, which examines the destruction inflicted by the Nazis.

The lyrics read: “We never forget those ghetto deaths, They sound like a midnight choir.”

In another song, the band repeatedly sing “It did not take place,” as an attack on those who dismiss or deny the Shoah.

Mr Kwiatkowski said: “After my grandfather and father, I am the new generation. I try to talk about the Holocaust and antisemitism. We can see more and more people claiming there was no Holocaust.

“The right-wing movement is more in power. The voices against it are now very important.

“But I think it also important not to criticise, but to understand these people, this country. Not just to play cynical political games.

“I don’t like to stigmatise people. We don’t say ‘All Germans are bad’, or anything. My role is to try to understand the mechanisms of how evil is created.”

Mr Kwiatkowski also argues that the terror of Communist rule in his country halted the process of collective reflection on the Holocaust. It is still recovering from decades of “devastation”, he said.

He hailed the “democratic structure” of Trupa Trupa, which has allowed him to express his feelings of frustration and injustice around antisemitism.

Historical and political concerns are not the focus for other band members, with Mr Kwiatkowski adding that the meaning of the band’s music is open to interpretation.

He said: “Holocaust, genocide, the Second World War — these are all aspects which are important to me, it is my area, but perhaps not for my friends. That is OK.

“We all have things to face. We can all asks ourselves difficult questions.”

Trupa Trupa will return to the UK in January, to play at the Rockaway Beach festival in Bognor Regis. 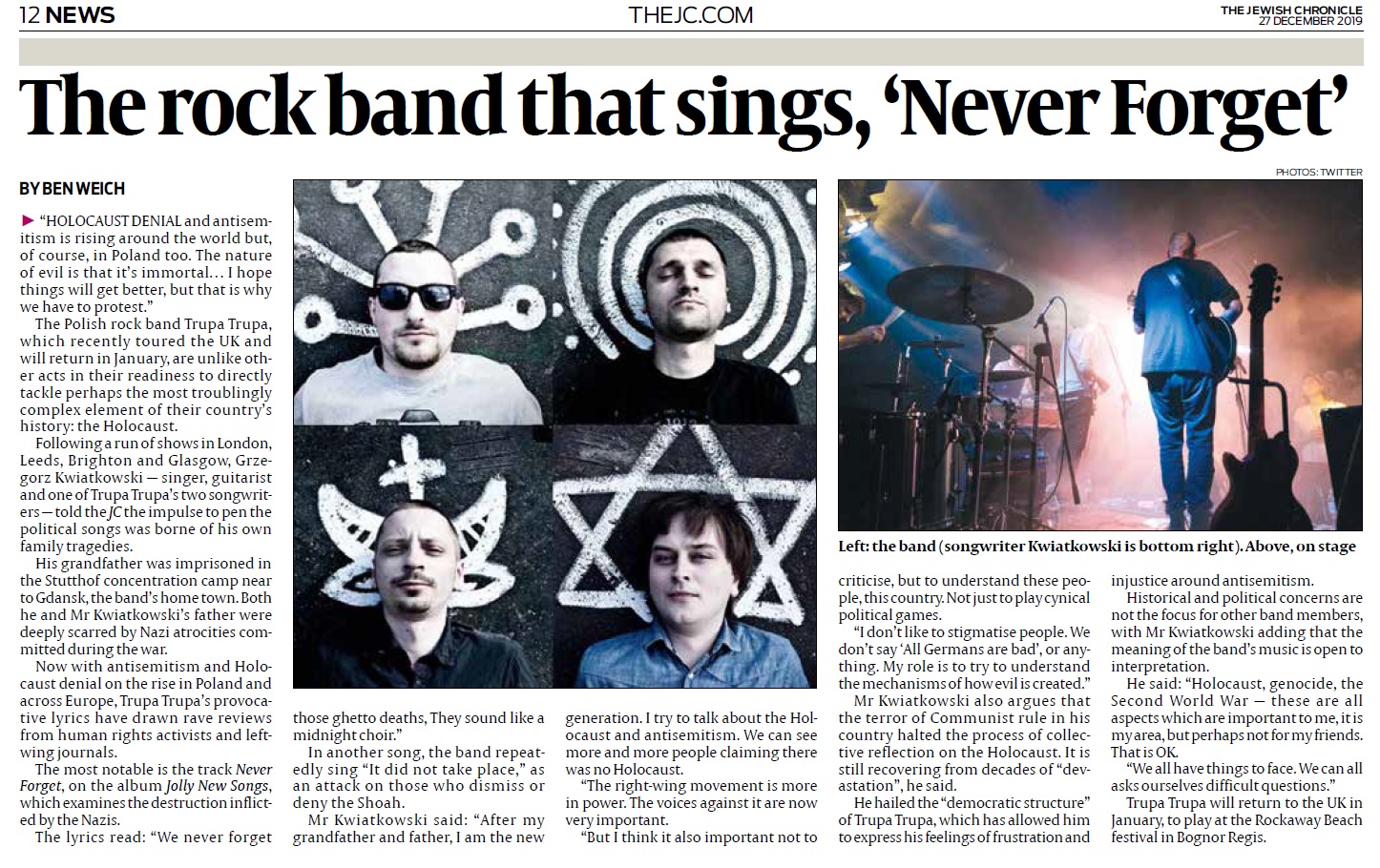