Trupa Trupa have not been making friends in their native Poland. They come from Gdańsk, that precariously placed city over which history has so often rolled like a tank. Their big theme is collective memory – the way it is distorted, perverted and suppressed for political ends.

They have set their faces against a wave of populism, authoritarianism and the duplicity of collective amnesia. They deserve to make more friends in Britain, however. Plenty of acts are doing post-punk right now, and plenty are doing psych. But few are combining the two, which Trupa Trupa do with tautness and skill. The Beatles sing Joy Division oversimplifies them, but doesn’t misrepresent them. At their recent Brighton show they also had moments strikingly akin to Plastic Ono Band. Their sound was condensed and powerful – a muscular, precise rhythm section overlaid with a flurry of ringing guitars. The songs from this year’s Of The Sun album cut to the heart of the dark road down which historical ignorance or revisionism leads. If this doesn’t sound much fun, be assured, Trupa Trupa are above all a cracking rock group, and they played a blinder. One day, if there’s any justice, the people claiming to have attended these early gigs will far outnumber the people who actually did.

Four out of five! 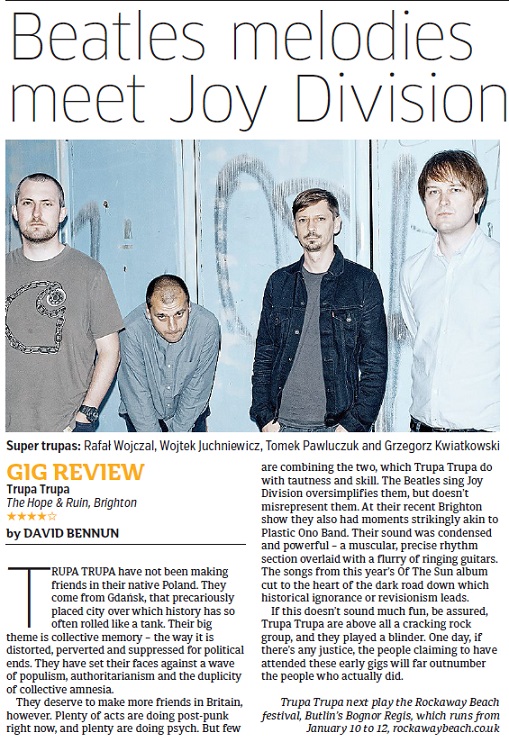